Uzbekistan is attracting Indian tourists to its historical heritages 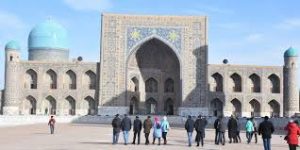 It is a lesser known fact that Imam Bukhari of Delhi’s Jama Masjid has his roots from Bukhara. Scientific and technological advances of Samarkhand had its influence here during the golden period of Silk Route that went via Uzbekistan. Such attractions lie ahead of Indian tourists via direct air links between Tashkent and Delhi.

In Uzbekistan, steady reforms are in progress to develop the tourism sector as one of the strategic sectors of the national economy, which in the long term is expected to generate jobs, diversify the economy and speed up development of regions, increasing income and improving quality of life of the country’s population.

Currently, there is a national tourism portal “Uzbekistan.travel”, where users can view information about Uzbekistan in eight languages.

Citizens of 77 countries can now get Uzbek tourist visas within two working days. Also, the validity of an Uzbek electronic visa for a 30-day stay in the country has been expanded to 90 days. Indian tourist arrivals to Uzbekistan reached 1.3 million in the first quarter of 2019, marking an increase of 42 per cent compared to the same period of 2018, as per the Uzbek State Committee for Tourism.