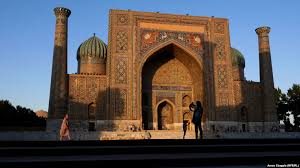 Popular Portuguese travel bloggers Raquel da Silva and Miguel Mimoso stood atop the 45-meter-tall Kalyan Minaret in Bukhara at sunrise gazing into each other’s eyes before an inevitable kiss.

The well-preserved medieval Central Asian city, including the turquoise onion domes of the Kalyan Mosque, stretching into the distance.

For those who know Uzbekistan, it is not the first — or probably even the 100th image — that comes to mind at the mention of the former Soviet state.

“We’re going to be honest,” the Instagram post accompanying the image and celebrating the couple’s 500,000th follower, begins. “We didn’t know much about this country. Actually, almost nothing.”

Most of their millennial followers are probably in the same boat. Which is precisely why Uzbekistan — once one of the most closed countries in the world — invited the Portuguese couple — along with nearly 100 other international social-media influencers — to wow their followers with creative photos and videos featuring its ancient cities.

“One of the problems for our tourism industry is the absence of quality content about Uzbekistan,” Behruz Hamzaev, the 30-year old strategy adviser to the country’s tourism chairman and the person who came up with the idea, said. “There is not much out there. So, we wanted to fill the Internet.”

Uzbekistan organised the five-day trip at the end of last month for 93 influencers from 40 countries. Many came from Asia and the Middle East, where Uzbekistan has strong historical and cultural ties as well as good flight connections, Hamzaev said.

While many countries, including Georgia and India, organize such influencer events, Uzbekistan’s was among the largest, longest, and most diverse in terms of blogger origin, says Sophie Ibbotson, the founder of Maximum Exposure Limited, a consultancy company which promotes tourism in emerging markets including Uzbekistan.

“There is a feeling that Uzbekistan is among the final frontiers of tourism and the next big thing,” Ibbotson says. “People who are influencing travel destinations want to be there ahead of everyone else.”

Uzbekistan’s event — which kicked off with a one-day congress in Tashkent — was attended by influencers focusing on travel, food, lifestyle, fashion and beauty, including Iranian model Sadaf Taherian.

The foreign bloggers “created world-class, kick-ass content,” said Hamzaev, whose understanding of tourism and English slang were honed as a tour guide in his teens.

Hamzaev estimates the photos and videos produced during the project have already been seen by 150 million people.

A 10-minute video of the Uzbek trip made by Indonesian influencer Atta Halilintar, who is among the top Asian YouTube stars, received more than 1.2 million views while his Instagram posts have received more than 400,000 likes each.

Uzbekistan in May launched direct flights to Indonesia, the world’s fourth-largest country by population and — like Uzbekistan — a predominately Muslim nation.

Hamzaev estimates the influencer event cost the state about $250,000. However, he claims it would cost $6 million to $7 million to get similar quality video and photos to such a wide audience through traditional media like television and print, he said.

News about Uzbekistan — if it appeared at all — tended to focus on forced child labour, human rights abuses, repression of religious minorities, and environmental problems, as well as the trials of Gulnara Karimova, the former president’s extravagant daughter who is currently in prison.

“I had one of the least recognized brands in the world, although I knew we have such great potential,” Hamzaev said.

Tourism has received new life under Karimov’s successor, President Shavkat Mirziyoev, who increased the number of visa-free regimes from nine countries in 2017 to 65 this year.

He also increased by half the number of simplified visa regimes to 75 countries and expanded the number of foreign flights. That has opened the tourist floodgates. Uzbekistan expects to receive about 6.3 million tourists this year – more than double the figure for 2017, according to Hamzaev.

Even though Uzbekistan’s tourism take nearly doubled last year to about $1.2 billion, the earnings are still below those of the three South Caucasus countries of Armenia, Azerbaijan, and Georgia, as well Central Asian neighbour Kazakhstan.

Uzbekistan’s tourism revenue could climb to $5 billion by the middle of the next decade if the country continues its course of opening up to the world, says Boban Markovic, a senior research analyst at the Washington-based Institute of International Finance.