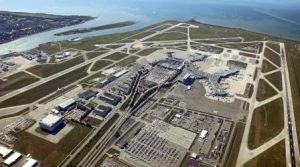 Vancouver International Airport (YVR) served its 25-millionth annual passenger in 2018. This accelerated growth can be attributed to a strong B.C. economy and an impressive three years of air service development due to ConnectYVR – YVR’s five year aeronautical rates and charges program.

ConnectYVR rewards airlines for growing their services at YVR as a means to create more jobs, increase access to global destinations and open additional markets for B.C. goods.

YVR is operated by Vancouver Airport Authority, a financially-independent organization that is governed by a non-political Board of Directors appointed from the community.

Every dollar earned by the Airport Authority is reinvested into the operation and growth of the airport to improve facilities, enhance services, reduce costs and support community initiatives.

The unique operating model allows for greater support and investment in the community, thereby creating jobs and driving economic and social benefits.

The airport supports 24,000 jobs on Sea Island and more than 100,000 jobs across the province. YVR’s operations – together with tourism and cargo – contribute more than $16 billion in total economic output, $8.4 billion in GDP and $1.4 billion in government revenue across B.C.

YVR has also updated its targets to facilitate the movement of 327,000 tonnes of cargo and serve 144 destinations by 2020 – currently YVR connects people and businesses to 127 non-stop destinations worldwide. Each new flight through YVR creates hundreds of jobs and contributes millions of dollars in economic benefit to the province.

YVR embarked on an ambitious 20-year, $9.1 billion expansion program earlier this year. These expansion projects have additional significant economic and employment benefits in the region. The construction activities at YVR have created nearly 2,500 full-time construction jobs on Sea Island in 2018 and hundreds more off-site, and they are expected to sustain thousands of jobs for the next two decades.