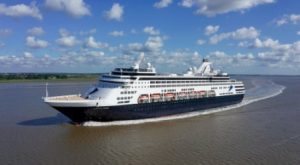 Cruise & Maritime Voyages has recently reported that the company’s Vasco da Gama ship has been granted permission dock in Fremantle.

According to the statement, today afternoon, the cruise lines were made aware via announcements that they have been given allowance disembark on Freemantle port. The Prime Minister of Australia, Scott Morrison and the Premier of Western Australia Mark McGowan made an official declaration regarding the same.

Earlier it was decided that will arrive at Freemantle on Friday but would not be given the permission to disembark its passengers. Dean Brazier, Managing Director, Australia Cruise Association said in a statement back then that the company was informed the ship will be sent to nearby Rottnest Island where passengers will be isolated for 14 days.

The ship even began informing guests about the change. But no guests on-board recorded any kind of health issue.

Cruise & Maritime Voyages informed the press that they are currently doing everything in power to gather the facts about the present situation as early as possible. The company mentioned that have an understanding of the pattern of disembarkation. Guests from New Zealand will be able to disembark the ship. They can then transfer to the airport to fly directly to New Zealand.

However, residents of Australia will be transferred to Rottnest Island. They can also be shifted to a hotel in Western Australia to spend 14 days in self-isolation before being allowed to continue on their journey back home.