Home » Victoria Falls – one of the best tourism spots in Africa

Victoria Falls – one of the best tourism spots in Africa 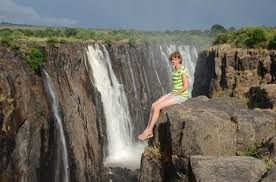 One of the most spectacular sights in Africa, Victoria Falls is a mile-long marvel of mist and spray standing tall in the border of Zambia and Zimbabwe. Known to locals as Mosi-oa-Tunya, “the smoke that thunders”, the roar from the world’s largest single curtain of falling water can be heard from almost 40 kms away.

The falls were named after Britain’s Queen Victoria by David Livingstone, the first European known to have crossed the Dark Continent.

Water levels in the Zambezi River are at their lowest from late August to early January and this is when fearless (or foolish) foreigners dive in and swim to Devil’s Pool.

Zimbabwe is yet to bounce back from its tourism slump, although Lonely Planet has included the nation once known as Rhodesia in its top 10 of countries to visit in 2019.

Victoria Falls hotel occupancy rates are at their highest for 20 years and 300,000 people are expected to visit this year – a far cry from 2008, when visitor numbers dwindled to 25,000.

Victoria Falls might be twice as high as Niagara in North America, but it’s a lot less commercialized, although that is changing. Helicopter flights and hot-air-balloon rides offer birds-eye views, and adrenaline junkies go white-water rafting down the mighty Zambezi or zip-line over it. There is also bungee jumping.

Further, both countries offer world-class game viewing. Safari goers have an excellent chance of spotting the Big Five in Hwange National Park, Zimbabwe, which is home to one of Africa’s largest elephant populations. In Zambia, South Luangwa National Park is famous for its walking safaris.