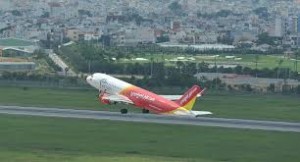 Vietjet continues its Asian expansion program with the launch of two new international routes: Hanoi – Taichung (Taiwan) and Danang – Daegu (South Korea). Tickets have started selling for the two routes which will meet the traveling demand of both locals and tourists and contribute to regional trade and integration promotion.

The Hanoi – Taichung route will be operated with 5 return flights per week on every Monday, Wednesday, Friday, Saturday and Sunday from June 22, 2018 with around two and a half hours flight time per leg. The flight departs from Hanoi at 13:00 and arrive in Taichung at 16:30 (local time). The return flight takes off at 17:30 (local time) in Taichung and lands in Hanoi at 19:20.

The Danang – Daegu route will be operated on a daily basis from July 19, 2018 with around four and a quarter hour flight time per leg. The flight will depart from Danang at 00:15 and arrive in Daegu at 06:30 (local time). The return flight will take off at Daegu at 07:30 (local time) and lands in Danang at 10:00 every day.

Daegu is the fourth largest city of South Korea, after Seoul, Busan and Incheon. With a convenient and diversified transportation system, Daegu is connected with many major cities of South Korea. Palgongsan Mountain, Cosmos Land or many famous parks including Apsan Park, Woobang Tower, Daegu Arboretum, Mangwoo Park, Gyeongsan-gamyeong and Gukchaebosang Memorial Park are the most favourite tourist attractions in Daegu.

Aiming to be a “Consumer Airline”, Vietjet is continually opening new routes, adding more aircraft, investing in modern technology and offering more added-on products and services to serve all demands of customers. Vietjet is a pioneering airline that is loved by many for its exciting promotional and entertainment programs, especially during the festive season. With high-quality services, diverse ticket classes and special low-fare tickets, Vietjet offers its passengers flying experiences on new aircraft with comfy seats, delicious hot meals, beautiful and friendly cabin crews, and other interesting added-on services.