Vietnam expects huge number of tourists in May holiday weekend 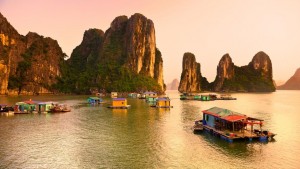 Vietnam’s long holiday at the end of April has become the perfect opportunity to travel, and bookings to popular destinations across the country have been flooding in.

The travel fever has been gripping the nation, from the southern island of Phu Quoc to central tourist destinations like Nha Trang and Da Nang, as most people prepare to enjoy a four-day break that starts this Saturday to mark Reunification Day, the end of the Vietnam War, and Labor Day.

Phu Quoc, Vietnam’s biggest island in the far south has become one of country’s top destinations thanks to its idyllic beaches and charming landscape.

However, the natural beauty has been compromised by a tourism boom that has resulted in the overheated development of a safari park and a bunch of luxury hotels, and that development shows no signs of abating.

Similarly, a number of hotels in downtown Nha Trang have no rooms left, and prices have shot up 20-30 percent for the holiday.

A hotel manager on Tran Phu Street said room rates have reached their peak for Reunification Day on Monday and International Labor Day on Tuesday.

The central resort city of Da Nang, which is counting down to a much-anticipated fireworks show scheduled to blast off on Sunday, has also seen a surge in room bookings.

It comes as no surprise that several top-end hotels in the city are already booked up with just four days to go until the Da Nang International Fireworks Festival, one of the highlights of the year in central Vietnam.

The cost of the only rooms left available has doubled compared to normal days, prompting some holidaymakers to look for homestay accommodation.