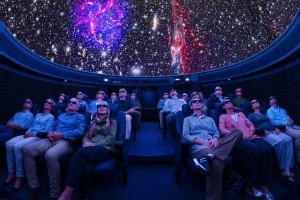 Viking Cruise’s Orion, now known as space themed cruise is attracting thousands of cruise passengers, as the Orion cruise has developed itself as high-tech planetarium on board.

Orion debuted in June, features a planetarium dubbed The Explorer’s Dome. It’s the highest definition planetarium to ever sail the seas.

Located on the upper level of the two-deck Explorers Lounge, The Explorer’s Dome offers guests special, panoramic films about exploration, such as “Journey to Space” and “Life Under the Arctic Sky,” in a fully immersive theater experience.

A 3D function allows guests to wear Active 3D glasses, which enhances the feeling of being in space, in addition to 2D screening. All shows and programming are free for cruise guests. The planetarium, which has a 20-foot dome, is on brand for space-themed ship Orion, which is named after the constellation and in honor of NASA’s Orion spacecraft and retired NASA astronaut Anna Fisher, who worked on the spacecraft.

The guests can also explore the ship’s “Explorations in Space” vintage space photo collection, which includes astronaut portraits and mission activities. The photos are produced by NASA and captured by National Geographic photographers as well as Apollo and Gemini astronauts.

The 930-passenger vessel, which was christened in Livorno, Italy, on June 14, has eight restaurants, two pools and a Nordic-inspired spa, which includes steam, sauna and a snow grotto, where manmade snow falls from the ceiling.