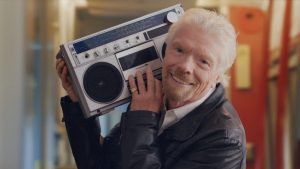 Virgin Trains has launched a tongue-in-cheek music video featuring founder Sir Richard Branson, celebrities from across two decades and a host of staff to wave goodbye to the West Coast Mainline, and celebrate its achievements as the UK’s longest running rail franchise.

The train operator is bidding a fond farewell to customers who have taken almost 500 million trips on its services since 1997. Virgin Trains is taking viewers on one final ‘journey’ with a two-minute video starting when the franchise began in 1997 and ending in 2019.

Featuring Richard and a cast of Virgin Trains employees who lip-sync to (I’ve Had) the Time of My Life from the iconic movie Dirty Dancing, it has been released to mark the final weeks of the Virgin Trains franchise, which is due to end in early December.

The video also stars some familiar faces from the ‘90s to present. From Crinkly Bottom’s most infamous resident, Mr Blobby, to Shaun Williamson, who made his name playing hapless Barry in Eastenders, with celebrity cameos for viewers to spot in between.

Commenting on the video’s release, Richard said: “Virgin Trains has led the UK rail industry for over 20 years, delivering faster journeys, ground-breaking innovation and award-winning customer service. Our 3,500 people are at the heart of the business and are the stars of this video, which celebrates the amazing work they have done to become the top-rated franchise in the UK today. We’ve had the time of our life serving our customers and wanted to celebrate the fun we have had with them since 1997.”

Over the course of our franchise tenure, Virgin Trains has nearly trebled passenger numbers, achieved consistent industry-leading customer satisfaction scores and introduced a fleet of tilting Pendolino trains. We have also led the field in tech innovation by automatically repaying people for delays, making digital tickets available for all fare types, introducing the ability to buy tickets on Amazon Alexa and launching our onboard entertainment streaming service, BEAM.

Phil Whittingham, MD, Virgin Trains, said: “Of course we’re extremely sad that Virgin Trains is disappearing as a train operator, but we wanted to leave as we entered: by having fun. We’re immensely proud of our track record over more than two decades and hope our customers enjoyed travelling with us as much as we enjoyed serving them.”

Kai Leung, an onboard Customer Service Assistant with Virgin Trains said: “I loved taking part in the film – it was great fun to celebrate everything we’ve achieved as a business over the past 22 years. I absolutely love my role at Virgin Trains and I’m sad to be saying goodbye; every day is different, and it’s a privilege to have a part in creating memorable experiences for our customers when they travel with us. We’re looking forward to continuing to serve customers on the West Coast when the new franchise starts in December.”