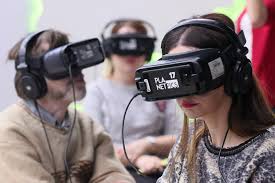 Apparently, virtual reality and tourism are made for each other. As long as commercial tourism has existed, it has been a primitive form of VR. In its most popular form, it involves “tourists” (as opposed to travellers or migrants) being guided around carefully curated landmarks which bear only a fading historical connection to the nations in which they’re physically located. Which means, tourists mostly see heavily managed, artificial environments, rather than the environments in which a nation’s people live, work, play, and evolve.

Similarly, virtual reality involves placing people in heavily managed, artificial environments. As such, it comes as no surprise to learn that the travel industry and various tech companies are increasingly experimenting with ways to use VR to give people the same basic experience of tourism.

According to a report published towards the end of last year by ResearchAndMarkets.com, virtual reality is set to have a big impact on the travel and tourism industry in the next few years. As the report’s author, Ralph Hollister, explains: “VR offers the potential to create substitute experiences that may be extremely useful for heritage and natural preservation.”

One such experience was first launched in 2018, when French start-up FlyView launched a VR attraction enabling tourists to see and feel what it would be like to fly over Paris in a jetpack. A more recent example of such “impossible VR tourism” comes from November, when the Four Seasons Resort Oahu at Ko Olina introduced a “virtual reality wellness experience” in which participants take a relaxing voyage through deep space, deep oceans and deep caves.

This is the more exotic end of the VR tourism spectrum, yet there’s an expanding roster of experiences which simply recreate more mundane tourist experiences, as if to remove the need to actually get on a plane.

For instance, in 2018 the Japan-based First Airlines began offering customers the ability to fly to a number of popular destinations in a mock aircraft in VR, something which might be of particular interest to anyone with a fear of flying. Also in 2018, senior citizens began a VR travel club at the Ebenezer Tower Apartments in Minneapolis, allowing them to visit famous tourist spots without leaving the building. And more recently, South Carolina State Parks opened a VR experience where people can hike to the top of Table Rock Mountain, saving not only time, but also potentially the environment.

Such isolated examples are likely to proliferate in the near future, with ANA, another Japanese airline, set to introduce its own virtual reality travel service involving robotic avatars later this year.

“The Travel World VR app is already the leading distribution platform for VR travel videos,” explained Travel World VR President, John C. Graham. “We foresee VR videos becoming the ultimate tool for travel advisors and meeting and incentive planners. This is about creating a new kind of sizzle that will dramatically increase sales.”

And with airlines such as Qantas introducing similar “pre-travel” VR content, it’s clear that virtual reality will at least be as much a boost to real-world travel as a replacement. The data it will collect will serve to provide travel operators and companies with a clearer picture of what specifically customers want from their tourism, and the virtual experiences will serve to make these same customers more excited about where they could be going.