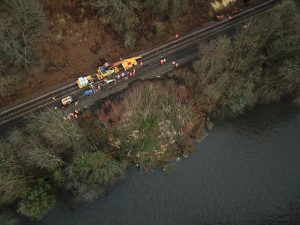 Work to repair the landslip beneath the railway between Kilmarnock and Dumfries is now getting underway following damage sustained during Storm Ciara.

The section of line near Holywood in Dumfries & Galloway has been shut since Monday (February 10) after Storm Ciara’s 90mph winds and extreme rainfall caused the nearby River Nith to erode an embankment beneath the railway.

Detailed examination of the landslip by specialist engineers confirmed the extent of the damage and have developed a programme to repair the 1,700ton landslip beneath a 50m stretch of track.

As work gets underway, Oliver Mundell, Member of the Scottish Parliament (MSP) for  Dumfriesshire, visited the site of the slip to see the damage first hand and to meet the team undertaking the repairs.

He said “I am grateful to Network Rail for the opportunity to come on site and see the damage caused by Storm Ciara and hear what is involved in rebuilding the embankment and reinstating the railway line.

“It is apparent that the damage is severe and it makes you appreciate the force of the river and the destructive power it had when fuelled by the extreme wet weather.

Tom Podger, Network Rail’s project manager for the reinstatement work said: “Flooding caused by Storm Ciara has led to significant damage beneath the track and we will need to rebuild the supporting embankment before reinstating and re-opening the line.

“The landslip is located in a difficult location above the river and the remoteness of the site presents a challenge in getting equipment and materials to the site.

“We are though working through these issues as quickly as possible to get the line re-opened for customers.”

Passengers with ScotRail tickets may travel on Avanti West Coast and TransPennine services between Carlisle and Glasgow Central, via Lockerbie.