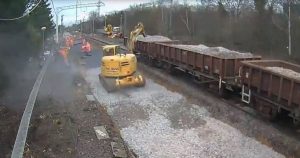 Network Rail has completed a £10million project which will allow trains to travel into Peterborough station at higher speeds, paving the way for faster and more frequent services to travel on the East Coast Main Line in the future.

The project included replacing two sets of switches and crossings, the specialist equipment which allows trains to move from one track to another, at Fletton Junction, as well as work to renew the signalling and replace 800m of track on the approach to Peterborough station. The changes now mean that trains approaching Peterborough station can travel at higher speeds through the area – 75mph instead of the previous 40mph.

This is just one of several enhancement projects that are currently taking place on the East Coast Main Line (ECML), which when taken together, will bring journey time improvements for passengers.

At Werrington, just north of Peterborough station a new ‘dive under’ is being created which will mean freight trains will no longer need to cross over three lines of the East Coast Main Line, causing high speed passenger trains to have to slow down.

Network Rail has also released time-lapse footage of the project.

Lynne Barker, Project Sponsor at Network Rail, said: “We are delighted that the completion of this project will enable tangible improvements to passengers’ journeys. Previously, trains had to start slowing down almost two miles before the station, which had a knock-on effect to services following behind. Now, thanks to the completion of this project, trains can maintain their speed.

“When taken together with the other projects that are happening up and down the East Coast Main Line, passengers can look forward to a much quicker and more comfortable journey from Scotland to London.”