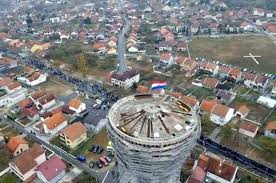 Croatian city, Vukovar welcomes its first cruise ship this year docked in port on Friday, bringing visitors from Great Britain, Ireland and the USA. The Ariana ship was the first of 318 cruise ships expected to visit the eastern Croatian town this year.

Deputy Mayor Ivana Mujkic, who welcomed the tourists aboard the Ariana, told the press that the local authorities were satisfied with a growing number of tourists coming to Vukovar on cruise ships sailing along the Danube. Vukovar has the privilege of having two rivers, the Danube, Europe’s second longest rive and Vuka.

Vukovar recently got a new promotional tourist video to attract more tourists to the city. The video, titled ‘Vukovar for all time’, follows happenings in Vukovar during the year and showcases what the city has to offer, including cultural attractions, memorial places, the river, food and more.

In 2018, there are around 231 cruise boats visited the town with a total of 32,000 passengers on board. According to data, last year Vukovar experienced 4% growth in tourist arrivals compared to the previous year. In 2018, Vukovar recorded 47,503 arrivals and 73,506 overnight stays.

Previously, Vukovar-Srijem County has recorded a dramatic rise in those leaving to go abroad in only one year, from 1.67 percent to 3.2 percent of the population.

Vukovar had also got its new tourism video advertisement presenting the tourism attractions of that eastern Croatian town on the Danube River which, according to the town’s tourism board, is attracting more and more tourists each year. The video ad was shot under the auspices of the town’s authorities and the local tourist board and was premiered to reporters this past Wednesday, with Mayor Ivan Penava saying that it was aimed at increasing the number of tourist arrivals to the town as part of the strategy to develop Vukovar’s tourism potential. A total of 125,000 kuna was invested in shooting the video, 20,000 kuna of which came from the Tourism Ministry, while the remaining funds were provided by the town’s authorities.