Home » We can be royals: where to get regal in New Zealand

We can be royals: where to get regal in New Zealand 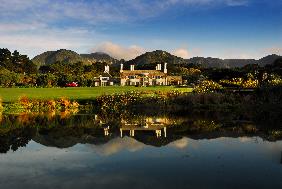 With the world’s latest royal nuptials still creating a buzz around the world, we look at how normal folk can get a little regal in New Zealand.

Meghan Markle and Prince Harry’s wedding is just around the corner, making these royals top of mind pretty much everywhere – including New Zealand.

While Prince Harry was a popular and much photographed royal visitor to New Zealand in 2015, it’s a much lesser known fact that Meghan Markle holds a special flame for New Zealand – in fact, she wrote a “love letter to New Zealand” posted on her (now-defunct) The Tig blog in 2014. She had travelled in a campervan on that trip; something the couple are unlikely to emulate if they return post-wedding.

British royals have a long history of visiting Aotearoa, the Land of the Long White Cloud. And so, to celebrate Meghan and Harry’s upcoming nuptials, we’ve compiled a list of stunning spots where “commoners” can follow in royal footsteps.

Bounded by hills and sea and overlooking the magnificent Palliser Bay, Wharekauhau Lodge hosted the Duke and Duchess of Cambridge (aka Wills and Kate) and Prince George when they graced New Zealand’s shores in 2014. Since then, the lodge’s  executive chef Marc Soper snagged the New Zealand Chef of the Year title, and general manager Richard Rooney was named one of the world’s top luxury resort managers. With rooms starting from $655 a night (off-peak), it’s good to know the help is top-notch.

Huka Lodge is as quintessentially Kiwi as the All Blacks and the silver fern. Claiming pride of place on the banks of the Waikato River near Taupo, the lodge has hosted both the late Queen Mother and the Queen, along with a long list of other European royals. Renowned for its excellent trout fishing (the Queen is rumoured to have cast a line or two on her visit), Huka Lodge is a much-lauded luxury escape.

The Art Deco Masonic Hotel is the perfect place to stay in Napier to fully immerse yourself in the Art Deco vibe.

The Art Deco Masonic Hotel is the perfect place to stay in Napier to fully immerse yourself in the Art Deco vibe. PC – Kirsten Simcox PhotographyWhen the Queen and Prince Philip visited New Zealand for her Coronation Tour in the summer of 1953-54 (the country’s first visit by a reigning monarch), they spent their time in Napier at the Art Deco Masonic Hotel – then just the Masonic Hotel. The hotel is still operational, and features some deeply impressive art deco architecture and interiors: in fact, the whole town of Napier is something of an art deco wonderland.

Matakauri – on the shores of Lake Wakatipu just outside of Queenstown – also hosted Wills and Kate on their 2014 tour, sans Prince George, who reportedly stayed with his nanny back in Wellington. With unparalleled views of The Remarkables and Cecil and Walter peaks, the lodge features clean architectural lines, oodles of glass and wood, and complete privacy.

Man-of-the-moment Prince Harry stayed at Stewart Island Lodge in Oban when he briefly visited New Zealand’s southernmost island in 2015. The small but upmarket Matakauri Lodge, Queenstown, sits on the shores of Lake Wakatipu and beneath the towering Remarkables mountain range. PC – Matakauri Lodge www.matakaurilodge.comlodge has views of Halfmoon Bay; each room has an ensuite and a shared balcony that allows visitors to soak up the magnificent views.

Matakauri Lodge, Queenstown, sits on the shores of Lake Wakatipu and beneath the towering Remarkables mountain range.

On their 2014 tour, the Duke and Duchess of Cambridge took time out to taste the Marlborough region’s famed Sauvignon Blancs at Whither Hills winery. The estate is also renowned for its food, which the royal couple undoubtedly enjoyed during their private lunch.

No trip to Queenstown would be complete without a jet boat ride. Clearly, Wills and Kate felt the same, as they spent their first day in New Zealand’s adventure capital with an exhilarating ride on the iconic Shotover Jet.

Queen Elizabeth II has always loved the gee-gees; not surprising, then, that she spent Boxing Day 1953 listening to the thunder of hooves at the race meet at New Zealand’s premier racecourse, Ellerslie in Auckland.

The dramatic and spectacular subterranean caverns at Waitomo are also likely to have delighted the young queen when she visited in 1953. Glow worms, stalagmites and stalactites (plus a local hotel that’s rumoured to be haunted) make Waitomo Caves a must-visit.

One of the highlights of Prince Harry’s trip in 2015 was paddling a Māori waka (canoe) down the Whanganui River on the North Island. After the 40-minute experience, the royal admitted he was “knackered”. Whanganui experiences for mere mortals include jet-skiing, fishing, white-water rafting and kayaking.

When Meghan Markle, now the Duchess of Sussex, visited New Zealand in 2014 she was full of praise for network of i-SITES which help tourists and locals with visitor information. The Duchess of Sussex was so impressed she wrote about them on her old blog The Tig saying, “All over NZ are i-SITE Visitor Information Centres where you get all sorts of information. You pop in and they’ll tell you the best nearby campsite, local intel, park info, etc. Many people don’t book accommodation in advance—you can book places to stay through i-SITES, and the people who work there are super friendly and helpful.”