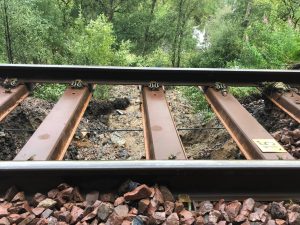 Train services will be reintroduced between Crianlarich and Oban from Monday, but the line will remain closed between Ardlui and Crianlarich until Thursday, August 22.

Engineers are on-site working around-the-clock to repair the line as quickly as possible for customers.

Detailed geotechnical and aerial surveys of the damage between Ardlui and Crianlarich have now been completed, allowing engineers to fully understand the extent of the repairs needed to reopen the railway.

The line has been closed since Sunday, August 4, after heavy rainfall caused the slope supporting the railway to give way at several points on a section of track in Glen Falloch.

Floodwater washed the track-bed out from beneath the line and engineers will have to replace thousands of tonnes of lost material to rebuild the supporting slope before they can repair the track itself.

The flooding also damaged ballast under the track on the Oban branch line, near Tyndrum.

The recovery works are further complicated by the remote location of the sites and the ongoing weather conditions.

To keep passengers moving ScotRail services are currently running between Glasgow Queen Street and Arrochar/ Ardlui and between Crianlarich and Fort William / Mallaig.  Buses are operating between Arrochar and Crianlarich, and to Oban.

Some train services will be introduced between Crianlarich and Oban from Monday, August 12, once engineers repair the flood damage around Tyndrum.

A final timetable will be confirmed in the coming days and customers are advised to visit the ScotRail website, download the app, or check @ScotRail on Twitter for the latest information before travelling on Monday.

Liam Sumpter, Route Director for Network Rail Scotland, said: “Our engineers will be working around-the-clock to reopen the line as quickly as possible for our customers.

“This is a very complex repair as we need to reconstruct the slope beneath the line – replacing thousands of tonnes of lost material – before we can repair the tracks above.