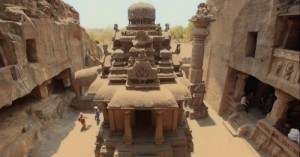 The Government of west Indian state of Maharashtra is planning to develop its lesser know rock cut caves to boost the tourism.

Maharashtra is home to some beautiful rock surfaces which were developed centuries ago. However, these are not as popular as other tourist hotspots in the state.

The government is planning to launch an agenda to develop these little-known caves having sculptures and inscriptions on them.

A senior official from culture department said that it will be done on the lines of conservation programme for forts and will have conservation, construction of approach roads, steps, tourist amenities like toilets, setting up of meshes and nets to prevent bats from infesting these caves and leveling undulating surfaces.

The State Directorate of Archaeology and Museums will take up this project and as per officials; they will try to get funds from the state tourism department.

Some of the prominent caves in the state including Ajanta & Ellora in Aurangabad, and Elephanta Caves in Mumbai, are under the Archaeological Survey of India (ASI).

A senior government official mentioned that some of the caves like Ghatotkach in Aurangabad situated close to Ajanta, feature Buddhist carvings on them. But because of little awareness, only a few visitors come here.

He also said that these caves are extremely old, dating back to the 6th century. There are several others such as Pandavleni Caves near Nashik, belonging to 1st century, and Pandavdara near Kolhapur from 7th century.