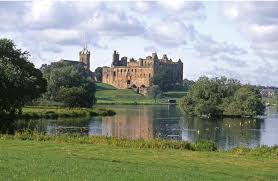 Scotland’s historic district, West Lothian welcomes over five million visitors in the past year considering a boom in local tourism.

And 2017-2018 saw Blackness Castle continue to celebrate the “Outlander effect” as it recorded a dramatic 44 per cent increase in footfall.  There are over 43,000 people visited the fortress on the Firth of Forth throughout the financial year, which stands in for Fort William in the hit television series.

Other sites in the region have also had an impressive showing, with Linlithgow Palace recording a 17 per cent increase in visitor numbers and Cairnpapple Hill experiencing a visitor surge of 30 per cent.

More than five million people visited HES managed Historic Scotland attractions across the country during the 2017-18 period, a significant 17 per cent uplift from 2016-2017.

The surge in tourists’ numbers at the historic sites across the length and breadth of Scotland is being attributed to growth in UK, European and overseas visitors, with a significant increase in Scots visiting sites partly due to a strong membership base of over 194,000.

The exchange rates, as well as strong airport numbers, have both contributed to the growing figures.