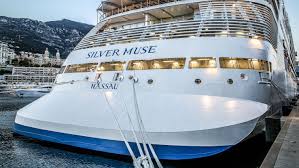 Silver Muse made its first WA stop in Albany on March 1, where guests experienced some of the region’s natural attractions, history and cuisine, including the National Anzac Centre, historic whaling station, Torndirrup National Park and the Denmark food and wine region.

The 596-berth ship docked overnight in Fremantle with passengers embarking on a wildlife and Swan Valley wine experience, a tour of Fremantle’s prison tunnels as well as visits to Perth city, Kings Park and Cottesloe Beach.

Guests also received a special commemorative medallion upon their departure from Fremantle, commissioned by Tourism Western Australia and produced by the Perth Mint, to mark the ship’s maiden visit to WA.

Geraldton was the final WA stop on Monday March 4, where guests experienced attractions such as Kalbarri National Park, an Abrolhos Islands scenic flight, and a trip to the Oakabella Homestead and Chapman Valley Winery.

Silver Muse’s WA visit is the first of many significant maiden calls by cruise liners to WA in March. The Superliner MSC Magnifica will visit on March 26 as part of a 119-day cruise, while the Viking Sun will stop overnight in Fremantle on March 27 and 28 en route to Durban, South Africa on a 29-day voyage.

Securing three maiden calls in one month is a significant coup for Fremantle Port, and supports the growing popularity of Western Australia as a cruise destination.

In another major boost for WA cruising, Princess Cruises has announced that it will homeport the Sun Princess superliner in Fremantle for a record 141 days in 2019-20.

Silver Muse is the newest ship in Silversea’s fleet of boutique vessels, which are known for their smaller size and upmarket spaces.