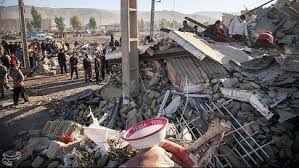 At least 15 aftershocks, ranging from 3.0 to 4.8 magnitude, have shaken the region so far, according to the centre. The earthquake was also felt in neighbouring Lorestan province, as well as, in Iraq.

Most of the injured people were hurt while escaping to the outdoors in panic, a medical official, said.

The quake also affected the quality of drinking water in Gilangharb, Kourosh Mahmoudian, the governor of Gilangharb, said assuring that the local people will be provided sufficient high-quality drinking water.