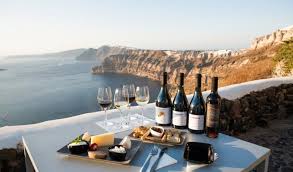 The sunset cruises, picturesque blue-domed churches and overwhelmed vacation cottages carved into a 300-meter cliff have made Santorini as successful place in tourism. But now the wine tourism in this Greek island is setting a new trend.

From the beginning of the 1990, vine cultivation and wine production entered a new era in Greece, when many modern wineries were built.  Now the wine cultivation is deeply encouraged by European Union incentives, making an alternative to plowing up fields to construct luxury hotels.

EU subsidies were used to promote wines from Santorini in the American market for seven years, from 2010 to 2017.  These days the wines of Santorini sell out as fast as the island can produce them, mostly in Greece, but also in the United States and the rest of the world. As a result, the loss of farmland to hotel construction has virtually ground to a halt.

Nowadays 1,300 hectares of this 7,600 hectare island is given over to wine production.

The success of the wine tourism has helped to ease concerns that Santorini was becoming too dependent on one source of income, just as it had been before a violent earthquake in 1956 that led to many residents leaving for the mainland.

The island’s smaller vineyards sell their grapes direct to Santo Wines, a cooperative based on the island.

The Greek island of Santorini has recently put limits on the number of tourists they are prepared to absorb. Nearly two million people visited Santorini last year, 850,000 of them on cruise