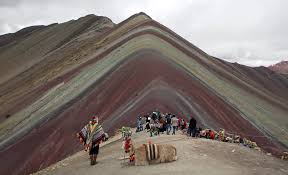 After the archaeological park of Machu Picchu, Winikunka in the Andean region of Cusco, has become the second-most popular destination in Peru. Winikunka is more commonly referred to as the Rainbow Mountain located between Quispicanchi and Canchis provinces.

According to off-season and peak-season figures, between 1,000 and over 1,500 (domestic and foreign) vacationers visited the area each day. Cusco Governor Edwin Licona met with Peruvian President Martin Vizcarra and government members to address the importance of this natural attraction in 2018.

“Nowadays, there is evidence to prove tourists visit Cusco not only for its historical and archaeological sites recognized worldwide. Current figures show that the second-most visited site in Peru, after Machu Picchu, is Winikunka,” he said.

Cusco Regional Directorate of Foreign Trade and Tourism (Dircetur) Head Rosendo Baca told Andina news agency that —by the end of this month— more than half a million domestic and foreign tourists will have flocked to Winikunka this year.