Winter storm causes 1770 flight cancellation across the US 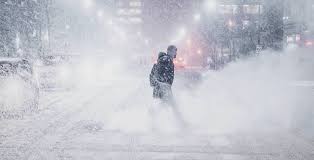 As a winter storm system moved across the Midwest and Northeast air travellers acroos the country faced a difficult time Tuesday.

A mixture of snow, ice and heavy rain were forecast from Minnesota to Maine on Tuesday morning, and flights were already being affected. Nearly all big airlines were waiving change fees for airports in the storm’s route.

More than 1,770 flights had been cancelled nationwide and another 680 delayed as of 9:35 a.m. ET. More than 1,200 of those cancellations were made by late Monday as airlines adjusted their schedules in anticipation of Tuesday’s poor weather.

Flight problems were widespread, affecting dozens of airports from coast to coast.

More than 430 combined arrivals and departures had been cancelled, affecting more than a third of the entire day’s schedule.

There were problems at the New York City area’s two other busy passenger airports. Nearly 20 per cent of Tuesday’s flights had been cancelled at JFK and about eight per cent at Newark Liberty.

In the Midwest, about 15 per cent of the entire day’s schedule was cancelled at Chicago Midway. Across town at O’Hare, more than 10 percent of flights had been cancelled so far on Tuesday.

On the West Coast, cancellations remained a problem in the Northwest after heavy snow there. About 110 flights were cancelled in Seattle after more than a foot of snow fell in the region from a storm that wound down Monday. That accounted for about 10 per cent of the day’s schedule in Seattle, but it was down sharply from Monday, when more than 400 combined arrivals and departures (about 30 per cent of all Monday flights) were cancelled.
Most big U.S. carriers had enacted flexible rebooking waivers for the weather.

The details varied by airline, but – generally and with some fine print – they allowed eligible customers to make one change to their itineraries without paying a change fee or recalculated fare.