Winter Storm Diego to cause cross-country havoc and travel disruptions 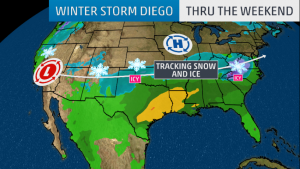 The storm system is causing lower-elevation rain and mountain snow in California, which will persist up to Thursday.

National Weather Service has issued winter storm watches from parts of the Texas Panhandle to western and central Oklahoma. Those watches include Amarillo, Texas, Lubbock, Texas, and Oklahoma City, Oklahoma. Additional winter storm watches will likely be issued farther east along the path of Diego in the next day or two.

Snow is expected in southern portions of California’s Sierra Nevada and parts of the Four Corners region. Rain will soak the lower elevations of southern California and extreme northwestern Mexico.

Snow, sleet and freezing rain may spread to southern Missouri and northern Arkansas by Friday night. Travel will be affected by wet and/or wintry weather on stretches of interstates 40 and 35 in the southern Plains.

Snow and ice accumulations from this storm will extend from the southern Plains to the Ozarks, Ohio Valley and the southern half of the Appalachian Mountains.