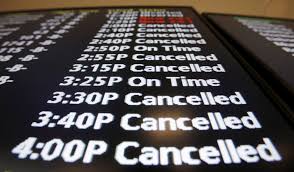 Around 100 million people are reeling under some form of a winter storm watch, warning or advisory across the United States.

Travelling has already been affected, with nearly 500 flights cancelled as of Friday morning, according to the flight-tracking site FlightAware.com. Airlines are in the process of issuing waivers for travellers in the Midwest and Northeast.

Major metro areas on the East Coast were to see light snow during Friday morning’s commute. The storm should move so quickly that accumulations are expected to remain low in New York and Boston.

The second storm will likely begin to drop snow late Friday across Kansas as it exits the Rockies.

However, Missouri, Kansas City and St. Louis — which received the worst of a storm last week– will get less accumulation this time. But, winds could gust up to 35 mph, causing blowing and drifting snow through Saturday night.

Indiana and Ohio could see rain to the south, snow to the north and ice and snow across the states’ centres. This second storm will be more significant for the Northeast than the first.

As the low tracks farther east, warm air is likely to mix in from the South. At this time, it’s uncertain exactly where the line between rain and snow will form.

Forecasters expect a substantial amount of precipitation Saturday evening through Sunday up and down the East Coast. It’s unclear on the timing or what type of precipitation is likely in the Northeast.

The latest model forecast indicates snow starting Saturday evening in Boston and New York, which will then turn into a wintry mix and freezing rain overnight into Sunday.
The National Weather Service in New York is forecasting three to six inches of sleet and snow plus possible ice. New York may warm up enough for rain Sunday morning, but freezing is expected by the evening when temperatures plummet.

Boston could get more than six inches of snow, with much more to the north and ice to the south.

Those close to the coast could see rain, but a few miles inland it will be a freezing rain mix and then a snow mix a bit farther inland. The snow will start piling up quickly after that.
Winter storm watches are already posted for upstate and inland New England. Heavy snow and sleet will pile up at least six to 12 inches deep, with some icing for added misery.