Winter storm in Texas tends to cancel more than 800 flights 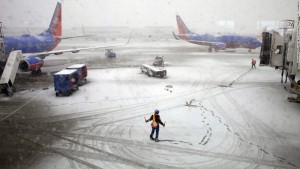 The airline companies have called off more than 800 flights on Tuesday as the winter storm hit in the eastern part of Texas where the airports are located.

There are more than 600 flights in or out of Houston’s George Bush Intercontinental Airport, a United Airlines hub, were cancelled.

The forecast for the region called for freezing rain and sleet. Houston was under a winter storm warning as of Tuesday afternoon, according to the National Weather Service.

The airline companies including United Airlines, American Airlines, Southwest Airlines, Spirit Airlines, Delta Airlines and JetBlue Airlines waived the date-change fees for travellers booked in cities affected by the storm, which is forecast to impact on the travel in the Northeast on Wednesday.

This wintry storm is forecast to hit the Northeast of Texas overnight, bringing as much as 7 inches of snow to the Boston area and up to 5 inches in the New York City area.

The winter storm is the second in two weeks to cause the major disruptions to air travel in the United States of America.

Previously most of the airlines cancelled more than 4,000 flights due to a powerful winter storm that struck the East Coast during the first week of the year.