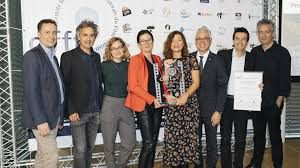 The world’s best tourism ads were awarded at the Grand Prix CIFFT in Vienna on Tuesday night. From over more than 3,000 entries, a People’s Choice Award, eleven nominees and two Grand Prix winners for film and commercial were decided on and awarded at the Ceremony at the Austrian Federal Economic Chamber in Vienna.

Among the awarded ones were films from Austria, Azerbaijan, France, Germany, India, Latvia, Portugal, Spain and the United Arab Emirates. The audience, comprising experts from the tourism and film industry, ambassadors and press representatives, was impressed by the quality of the films.

The Grand Prix for the World Best Tourism Film went to the production “Insider’s Guide to Riga” produced by DDB Latvia and nonsense.tv for Riga Tourism Development Bureau.

The Grand Prix for the World Best Commercial was awarded to the Department of Culture and Tourism of Abu Dhabi for the spot “Abu Dhabi – Your Extraordinary Story.”