World’s largest underwater theme park to be launched in Bahrain 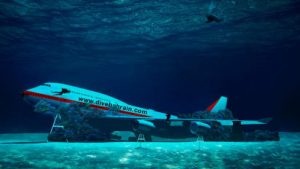 Head to Bahrain for the ultimate diving experience as it will launch the world’s largest underwater theme park with a major attraction being the sunken Boeing 747. It will be covering 25 acres and open this summer and situated between Qatar Peninsula and Eastern Coast of Saudi Arabia.

Bahrain is one of the friendliest Arab countries for foreign tourists, it has famed forts and the 400-year-old  Tree of Life.

Sheikh Abdullah bin Hamad Al Khalifa, Bahrain’s president of the supreme council for environment partnered with the Bahrain Tourism and exhibitions Authority as well as private investors to create the extravagant project which will be focal point of the diving attraction.

It will offer the largest submerged airplane in the world and will have features like the Bahraini pearl merchant’s house, artificial coral reefs and other sculptures that have been placed underwater as a safe haven for coral growth and as a habitat for marine animals.

From around the world the diving enthusiasts will be attracted facilitating the researchers to obtain data and information on marine technology.

The demand for new tourists will be met with more international flight addition at the new passenger terminal at the Bahrain International Airport.

Along the Bahrain Bay 22 new hotels will be launched within a span of next three years and five new beachfront properties.