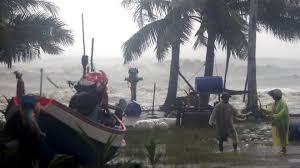 In the worst storm to lash the region in three decades, tropical storm Pabuk inundated southern Thailand with wind and rain.

The floods caused by violent storm Pabuk have left nearly 30,000 people in evacuation shelters across southern Thailand, but most of the tourists stranded on holiday islands were spared the worst and began to plot routes home.

The storm made landfall at 12:45 local time, sending trees crashing down into houses in the province of Nakhon Si Thammarat. It is moving across southern Thailand, affecting popular tourist spots.

Thousands of people have already left Koh Samui, Koh Tao and Koh Phangan islands but many are riding out the storm.

At least two nearby airports on the mainland have been shut and ferry services have been suspended. Tourists stranded on Koh Samui said that the island is witnessing heavy rain, wind and waves and there have been short power cuts.

People also say they have been advised to stay indoors after 16:00 local time until Saturday morning.

The eye of the tropical storm is passing over Nakhon Si Thammarat, to the south, and is expected to weaken into a tropical depression over Surat Thani province.

The UK Foreign Office is advising Britons to avoid all but essential travel to provinces near the Thai-Malaysia border. While storms are common in the Gulf of Thailand at this time of year, Pabuk is thought to be the worst in decades to hit during the peak holiday season.

Thailand’s meteorological department said the storm would affect the south of the country for the next few days and torrential downpours are possible in much of the area.

There are around 200,000 people were left without power as dozens of electricity poles were toppled by high winds or falling trees.

Some 30,000 customers remained without electricity early Saturday, according to an update by the disaster prevention and mitigation department.

A similar number of people remained in evacuation shelters, waiting for floods to recede and power to be restored, it added.

Pabuk struck in peak tourist season, a blow to the cash-cow sector that is integral to  tourism economy of Thailand.