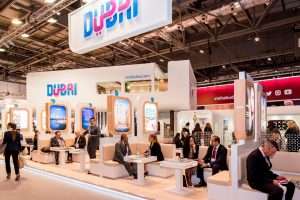 WTM London 2018, the event where ideas arrive, generated a record £3.4 billion in travel and tourism industry deals, surpassing the figure of £3.1 billion from WTM London 2017.

The global travel and tourism industry continues to grow with more than £1.4 billion trips predicted to taking place globally in 2019, with the number predicted to rise to £1.8 billion by 2030. Inbound tourism to the UK is approaching 40 million trips annually, while Brits make almost 73 million outbound trips each year.

The independent research of WTM London’s exhibitors reveals WTM London 2018 will generate a massive£3,353,042,708 in travel industry deals, either through contracts signed at the event or from negotiations with WTM Buyers’ Club members – the buyers with the greatest purchasing responsibility in the travel industry – which will lead to deals signed before WTM London 2019.

The record number of visitors and business conducted demonstrates the success of WTM London 2018’s new Ideas Arrive Here concept, which included the introduction of five regional Inspiration Zones – UK&I and International Hub, Europe, Asia, Americas and Middle East and Africa. These InspirationZones led to an increase in content, ideas and inspiration for participants to take back to their business and implement to help fuel the growth of the travel and tourism industry.

Furthermore, two new launches in Travel Forward and the International Travel & Tourism Awards (ITTAs) grew WTM London’s reach further. Travel Forward – the event to inspire the travel and hospitality industry with the next generation of technology – was a great success with more exhibitors and visitors than its predecessor The Travel Tech Show at WTM. The inaugural ITTAs saw almost 500 audience celebrate excellence within the travel and tourism industry.

WTM London, Senior Director, Simon Press said: “I am delighted with the record amount of business conducted at WTM London 2018. This success firmly positions WTM London as the event where ideas arrive and a must-attend for national and regional tourist boards, global brands, luxury and technology companies.

“The record visitor numbers at WTM London 2018 alongside the £3.4 billion in business generated shows that WTM London – as it approaches its 40th event in 2019 – and the travel and tourism industry are both in good health.”