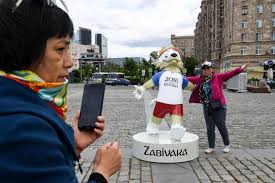 The current 2018 FIFA World Cup has witnessed a massive 5 million tourists, comprising 2.9 million international visitors that have visited the cities for the matches, as per a recent statement made by the head of the Russian Federal Tourism Agency, Oleg Safonov.

Many football fanatics, overseas state officials and politicians, as well as experts have already admired Russia’s organization of the 2018 FIFA World Cup, observing that the warm-hearted hospitality in all of 11 cities, but branded the outcomes of this world championship as completely unpredictable.

The semi finals begins today Friday June 6th as France do battle against Uruguay in Nizhny Novgorod stadium for a place in the semis, the city of Kazan will host the Brazil vs Belgium encounter.