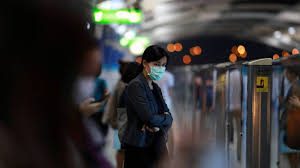 Well-known Asian travel destinations encounter risks of an extended decline in terms of visitors from China, a group that generates almost 20% of global tourism spending, as the deadly coronavirus disturbs travel and encourages anti-Chinese sentiment.

Postponing flight and travel restrictions weaken the tourism sector of China during the Lunar New Year holiday, and few analysts hope that the downturn to lasts until 2021.
However, as the outbreak of the virus takes a toll of over 1,300 lives in China, few countries face calls from the public for a complete stoppage on Chinese visitors.

Reportedly, all restaurants in South Korea, Japan, Hong Kong and Vietnam have declained to accept customers from mainland China.

“Negative reports from some foreign media” are partly to blame, said a 29-year-old Beijing based marketing executive who gave her surname as Lu.

During Lunar New Year, Lu generally travels overseas with her boyfriend but scrapped the plan after news of the outbreak surfaced.

“If we travel overseas, we may have to explain that not every one of us is a disease carrier,” she said. In Japan, few recent incidents which had 26 confirmed cases as of Wednesday, also suggests rising xenophobia.

Tokyo Gov. Yuriko Koike explained on Feb. 7th that Chinese runners have been asked “to voluntarily refrain” from participating in the Tokyo Marathon, scheduled on March 1st. The annual marathon, Asia’s largest, according to the organizer — is all set to greet almost 10,000 runners in 2020 from abroad with 18% coming from mainland China, Hong Kong and Macao.

A day before, the organizers gave notice that Chinese runners had the chance to defer their entry to 2021, if they fail to compete this year. The Kyoto Marathon, set for Sunday, is taking a similar step.

Koike state that it would be tough for runners from China to take part because many domestic and international flights in China have been called off. But the decision to single out Chinese athletes, rather than cancel the event itself, triggered a backlash.