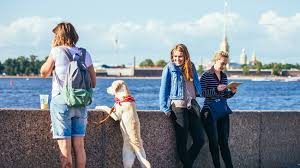 Maya Lomidze, the Executive Director of the Association of Russian Tour Operators explained on Tuesday that a rising trend in the tourist number to Russia has been sustained until the end of this year and has made up 20 percent in comparison to the last year.

“As a result, we see that in the organized segment, which accounts for up to 90 percent of inbound tourism, positive dynamics remained. We expect the tourist flow to increase by 20 percent among those citizens that have indicated tourism as the purpose of their arrival by the end of the year. In total, according to preliminary estimates, more than five million foreign tourists have visited Russia,” Lomidze said at a briefing that was targeted on the tourism trends of 2018 and forecasts for the industry for 2019.

“In 2019, tour operators expect the growth of the inbound tourism segment in Russia will increase by at least 15-20 percent compared to the level of the current year,” Lomidze said.
Lomidze observed that better dynamics in this year were shown by China, the United States, Germany and South Korea.