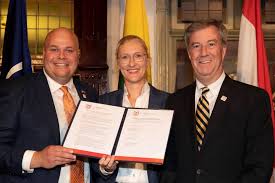 On yesterday, all the senior representatives from Ottawa Tourism and The Hague Convention Bureau assembled together to expereince the signing of a Memorandum of Understanding that will bring the two cities’ convention offering closer together over the coming years.

The event took place at the Louwman Museum in The Hague. It was attended by over 100 representatives from the two cities and meetings industry. Besides, the convention targeted MOU, the event also celebrated at the same time showcased their friendship between both the cities of Ottawa and The Hague and the nations of Canada and The Netherlands.

The convention focused MOU, which was signed by Nienke van der Malen, director of The Hague and Partners; His Worship Jim Watson, Mayor of the City of Ottawa and Michael Crockatt, President & CEO, Ottawa Tourism, was at first proposed five years back at the ICCA Congress in Antalya. The two organizations have since sought a range of ways to assist, resulting in the MOU signed yesterday.