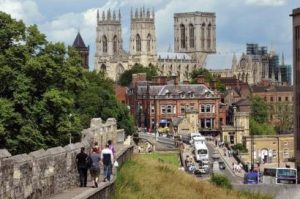 The tourism figures show that York received 8.4 million visits, bringing an economic value of £765 million for the city. The headline statistics, released ahead of today’s VisitYork tourism conference, are the latest available for York and show the industry also supported more than 24,000 jobs, a rise of 3,000 within the sector over the last five years. The visitor numbers, which will be highlighted at today’s Visit York tourism conference, are up 12 per cent – 900,000 more visits, over the last five years. This spells a 20 per cent rise of £126m in the value of tourism.

VYCON 2020 is at York Racecourse, where tourism leaders will be sharing plans for the future of the sector in the city.

A key message will be that people will be encouraged to stay longer and explore more.

The event has a line-up of speakers including Andrew Palmer, director of Creative Tourist Consults; Anthony Pickles, from VisitBritain; David Horne, managing director of LNER; and Melanie Sensicle, chair of England’s Historic Cities.

A panel of tourism businesses including Castle Howard, The Grand Hotel & Spa, City Cruises and The Potions Cauldron will also share their insights into attracting international audiences.

Researchers have used new research methodology to analyse the impact of tourism for the latest York Visitor Survey results (2018), the first published since 2015.

They also reveal that day-trippers are still the largest group, accounting for four out of every five visitors, with 4,000 more overnight visits, or 316,000 more bed nights.

There has been a decline in the length of stay (now 2.2 nights), continuing the steady decline over the last decade of around four per cent per year.

There has been a stable number of international visits to the city at 289,000, compared with a UK-wide decline in inbound visits of five per cent from 2017.

Visitors are increasingly looking at sustainable transport when heading into York, with car use down by 11 per cent, to 55per cent while 39 per cent now come by train (up from 30 per cent).

Delegates will hear how the latest insights are being fed into a refreshed York Tourism Strategy, which still aims to create a £1 billion tourism industry by 2025.