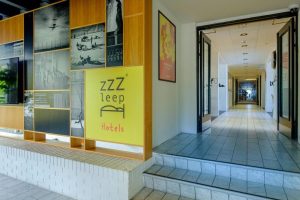 With six hotel projects in the pipeline, Danish hotel chain Zleep Hotels plans to double its room capacity from 870 to 1700. The first two will open in January 2019; one in Aalborg and other in Upplands Väsby, Stockholm. Zleep Hotels is entering the Swedish market for the first time.

Peter Haaber, CEO of Zleep Hotels said: “Over the last three years we have been working on an expansion of Zleep Hotels. The expansion has been going on for a long time, as the next hotels we open are purpose build and developed for Zleep.”

He adds that it takes a longer time to build and develop from scratch than it does taking over already existing hotels.

Cooperation between the green city car concept DriveNow and Zleep Hotel Copenhagen Airport has made it possible for hotel guests to drive back and forth between the airport and the hotel. Zleep hopes to get more charging stations and DriveNow cars in several other hotels in the future.

It has invested in the digital check in terminals allowing the guests to check themselves in and avoid standing in line in the reception. These are just a few of the various measures they are taking to expand their hotel chain.