Airbus Beluga XL transport aircraft was debut launched in Toulouse, France this July, after undergoing 10 months of flight testing for certification it will be launched in 2019. It is among first of five which Airbus expects to build by 2023 to replace the existing BelugaST models which transfers large aircraft pieces.

TTW in an exclusive interview with an Airbus spokesperson  gathers insights about the mechanism involved in world’s strangest looking plane or ‘ whale of the sky’, destinations it will serve and more.

Travel And Tour World :Airbus Beluga XL was recently tested, tell us about it and by when can we expect its operation?

Airbus spokesperson : Airbus has a whole line of passengers widebody aircraft ranging from 250 to 600+: A350, A330 and A380. The Beluga is an Airbus production tool used to transport Airbus aircraft major components between Airbus European sites. Airbus plans to build 5 BelugaXL and its entry into operation in Airbus Transport International will be as A/C 2: second semester 2019, A/C 3: first semester 2020,A/C 1: second semester 2020A/C 4: 2021 , A/C 5: 2022.

Travel And Tour World: What will be the mechanism involved in flying the huge BelugaXL?

Airbus spokesperson : BelugaXL fleet is part of the production system to face the production ramp up, it provides growth potential for the future  with +30% extra transport capacity.

The 5 BelugaXL will gradually replace the current fleet of 5 BelugaST, between 2019 and 2023.The BelugaXL has the largest cargo bay cross-section of all existing cargo aircraft in the world (+8M).

The Beluga XL is 7m longer than Beluga ST and its diameter is increased by 1m allowing it to carry two A350XWB wings while the BelugaST can only carry one .Maximum payload is 51 tonnes over a distance of approximately 4,000 km.

Travel And Tour World: Which destinations it will be serving?

Airbus spokesperson :It will serve 11 destinations. 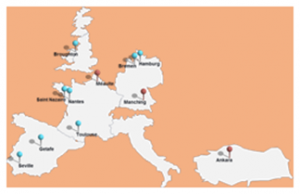