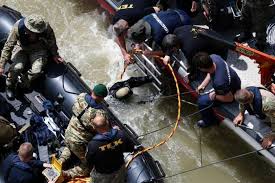 Experts have come to the conclusion that the captain of a sightseeing boat that collided on the Danube River with a larger cruise ship killing 28 people, including himself, was not responsible for the deadly crash, Hungarian police said Tuesday.

The small Hableany (Mermaid) tour boat collided with the Viking Sigyn river cruise ship on May 29 near the Hungarian Parliament. All but two of those killed were South Korean tourists aboard the Mermaid. Seven South Koreans on the boat survived but the remains of one missing female South Korean tourist have not been recovered.

Col. Adrian Pal of the Budapest Police reported the results of the recently-concluded investigation, which contained 11,000 pages of documentation and over 4,200 photos.

Authorities have not released the name of the deceased captain of the Mermaid.

Pal also denied media reports that the Ukrainian captain of the Viking Sigyn, identified only as Yuriy C., had been drinking or was not at his post when the collision took place on a rainy spring night shortly after 9 p.m.

“No signs of alcohol or other mind-altering drugs were found” in samples taken from the captain immediately after the incident, Pal said. ”He was on the bridge at the time of the accident. There are clear sound recordings of this.”

Yuriy C. is the only suspect so far in the case and is under pre-trial arrest until Nov. 30 at the latest. He is suspected of endangering water transport resulting in a fatal mass catastrophe and of failing to offer aid at the time of the crash.

Pal said the Viking Sigyn’s captain claimed several times in his testimony that he “simply did not notice” the Mermaid before the collision after sunset near the base of the city’s famous Margit Bridge.

Pal also said the river cruise ship’s technical equipment was in working order and that the radar which would have warned his crew about the Mermaid’s proximity was turned on, although its sound was off. It was not clear why the sound was off.