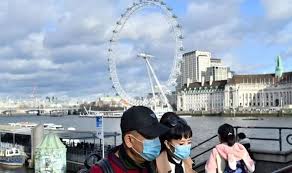 So far more than  1,300 people  have been killed by the deadly outbreak of Coronavirus and sickened tens of thousands more.

The London Underground could be a hotbed for coronavirus, doctors have warned.

The ninth person in the UK tested positive for the virus was a woman in London and fears are rife that the capital’s transport system could be a breeding ground for disease.

Around five million people each day take The Tube which is one of the world’s busiest transport metro systems.

Dr Robin Thompson of Oxford University said that in general if an initial case is found in a densely populated area then the risk of sustained person-to-person transmission fowling is higher.

It might be expected that there is an increased risk posed by this case as compared to the other they have seen given that the case was in London.

More than 99 per cent of those tested had been negative out of the 1,750 tests carried out so far. This was affirmed by the Dr Michael Head from the University of Southampton who went on saying that risks to Londoners and UK residents remained low though public should keep an eye on guidance for the general public.

The National Institute for Health Research advised that London commuters should ‘go about their business as usual’.

Dr. Nathalie MacDermott mentioned that provided the individual followed the government’s advice ( to self-isloate) there should be little concern of transmission to the general public in London.

The World Health Organisation has advised people to frequently wash their hands with an alcohol-based hand rub or warm water and soap, cover their mouths and nose with a flexed elbow or tissue when sneezing or coughing . Close contact should also be avoided.