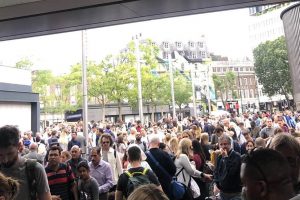 At the southern terminus, King’s Cross Network Rail is using three-day break for a project. According to the organisation a multi-million pound investment into the infrastructure at King’s Cross railway station will transform train travel on the East Coast Main Line by replacing track, signalling and overhead line equipment outside the station.

The station serves Cambridge, King’s Lynn and Lincoln and is considered as one of the Britain’s ten busiest.

Passengers on Grand Central, Hull Trains, Thameslink and Great Northern will be affected by the closure while the main operator is LNER.

Network Rail stated that the track layout has reached the end of its design life and become harder to maintain. While the station itself was modernised in 2012, the existing track and signalling was installed over 40 years ago and is in need of upgrading.

Two new lines will be opened at the same time by the re-opening of a disused tunnel on the approach to King’s Cross. This will increase the approach from four tracks to six.

Over the last weekend of August, King’s Cross is the main focus of the now-traditional closure of key lines. However at London Euston, traveller on the West Coast main line will be facing sharply reduced services.

Europe’s busiest inter-city rail line in the Milton Keynes area will have two of the four tracks closed which will cut the capacity and speed.

Trains will be reduced to one per hour on most routes to Birmingham, Manchester and beyond.

The London-Chester service is not active and the Holyhead service will run only northwest from Crewe.  Many passengers are expected to switch from East Coast main line to Virgin Train while the West Coast main line is likely to be significantly busier than usual.

The operator said that the Virgin Trains strongly recommend that customers planning to travel make a reservation.