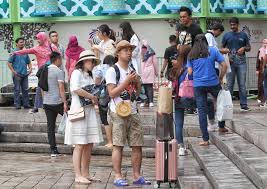 Fresh off recent declaration of positive growth in international tourist arrival, the Malaysian Association of Hotels (MAH) has disclosed that hotels in the country are experiencing low occupancy level.

“The same was seen for the first half of 2019 where earlier in August, according to Tourism Malaysia, there was an increase of +4.9% or 13.4 million in international tourist arrivals but hotel occupancy recorded a drop of -4.75% compared to the same period last year,” MAH said in a statement.

As per MAH, the published results “raised more doubts and concerns than it could draw praises”.

“While (the results) should indicate a healthy and recovering or even growing tourism industry, the same was not felt by industry stakeholders,” MAH said.

Tourism, Arts and Culture Minister, Datuk Mohamaddin Ketapi had proclaimed earlier this week that foreign tourist arrivals have grown in the first three quarters of this year.
Between January and September, Malaysia received 20,109,203 tourists, a 3.7% growth compared to the same period in 2018.

The initial nine months of 2019 also witnessed an increase of tourism receipts by 6.9% to reach RM66.14bil compared to RM61.85bil for the same period last year.