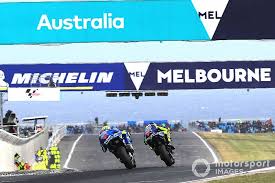 Two-wheel motor racing fanatics are descending on Phillip Island by their thousands for the 2019 Australian Motorcycle Grand Prix, which kicks off on Friday and culminates with race day on Sunday.

The race will be the 23rd successive Australian Motorcycle Grand Prix to be run at the 4.45-kilometre circuit overlooking Bass Strait since Victoria wrested the event from New South Wales in 1997.

The MotoGP will feature an all-star line-up including six-time world champion Marc Marquez, last year’s winner at Phillip Island and fellow Spaniard Maverick Vinales and Australian Jack Miller who will seek to better his seventh-place finish from last year.

It will be the highlight of a jam-packed schedule across the three days which includes the Moto2 and Moto3 Grand Prix races, trackside entertainment and the annual Barry Sheene Tribute ride to the circuit.

The Andrews Labor Government has made a long-term commitment to fans and the Australian MotoGP, locking in the event at Phillip Island until at least 2026.

Tourism is crucial to Phillip Island’s ongoing prosperity, attracting 2.5 million domestic and international visitors to the region in the year to June with spending coming in at just under $550 million.

The Labor Government is getting on with securing the best events for Melbourne and regional Victoria.

“Victoria is the major events state and the Australian Motorcycle Grand Prix at Phillip Island is the jewel in the crown among regional attractions.”

“The MotoGP is one of the great dates on the Victorian calendar – I’m looking forward to being trackside to marvel at the speed of the bikes and the skill of the riders.”

“We hope our visiting motorsport fans also take the time to check out our stunning landscapes, pristine beaches and marine parks – and enjoy the quality local produce found across the entire Bass Coast region.”

“We’ve got the best motorcycle racing in the world coupled with the stunning sights of Phillip Island – this weekend’s Australian Motorcycle Grand Prix shouldn’t be missed.”