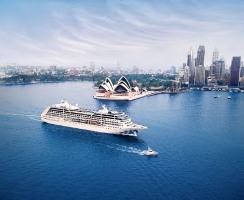 Princess Cruises has announced Pacific Princess’ 2020-2021 summer line-up in Australia, with the boutique ship offering cruisers a number of unique itineraries during its four-month deployment. Prior to arriving in Sydney, Pacific Princess will also sail on an additional 10-day Tahiti voyage due to popular demand of the cruise line’s return to this region.

Pacific Princess’ program will include an epic 90-day roundtrip Sydney voyage around South America, a 13-day cruise to New Zealand and a special 21-day sailing to remote locations in Papua New Guinea and the Solomon Islands.

The December 2020 arrival of the 670-guest Pacific Princess coincides with the 45th anniversary of Princess Cruises’ first roundtrip cruise from Australia, a voyage on the original Pacific Princess which served as the iconic backdrop and co-star of the popular TV series “The Love Boat.”

Due to the popularity of the five, 10-day Tahiti voyages previously announced for fall 2020, Pacific Princess will sail an additional 10-day Tahiti & French Polynesia voyage departing on November 24, 2020.This voyage can be combined with a new 16-day South Pacific & New Zealand itinerary sailing from Tahiti (Papeete) to Sydney for a 26-day Tahiti & South Pacific Grand Adventure. The 16-day itinerary departs Tahiti (Papeete) on December 4, 2020.

On January 3, 2021, Pacific Princess then sails on a voyage of a lifetime, a 90-day Circle South America voyage, roundtrip from Sydney, which circumnavigates the continent and visits Rio de Janeiro during the famed Carnival festival. Options to sail from Auckland or to Brisbane will also be available. This epic voyage includes 28 destinations in 16 countries including overnights in Rio de Janeiro, Buenos Aires and Lima (Callao), with maiden calls for the Princess Australian market to Santos, Ilhabela, Natal and Guayaquil.

To round out her deployment from Australia, Pacific Princess will also offer a new 21-day Papua New Guinea & Solomon Islands itinerary, departing April 3, 2021, with maiden calls to Madang, Wewak and Gizo Island. Following this unique voyage, Pacific Princess sails to Japan on a 24-day Asia & Australia visiting amazing destinations in Taiwan and Japan, including Hualien and Ishigaki. Pacific Princess has been named “Best Small Cruise Ship” by CruiseCritic, the leading cruise reviews website.

Princess Cruises past guests are eligible for a special promotion when they book early with up to a $100 per person discount off the public fare. This can be combined with launch and group promotions. These discounts do not apply to third or fourth berth guests. Additionally, a reduced deposit is available for Captain Circle guests when they book by November 30, 2019.