Record number of applications for Irish passport so far 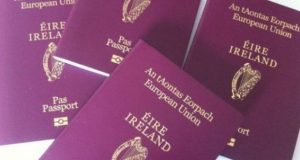 Ireland has received record 230,000 applications for Irish passport from January 19, to March 16. 2019.  About 76,000 Irish passports applications are from people out of Ireland. As per Simon Coveney, the Irish foreign minister, the 230,000 applications represented a 30 per cent increase on the same period last year. Additional, 5,000 people are expected to submit claims online this weekend alone. It indicates that 2019 will create new records.

The Irish foreign ministry attributes the increase to more interest in traveling and a tendency towards early renewal. Ireland is a member of the EU. In 2018, Ireland received applications for 860,000 passports, including renewals, which was the highest number in the country’s history. Of those, 84,855 applications were from Northern Ireland, 98,544 were from Great Britain.

It puts 2019 on course for the highest level of applications in the history of the country, after a record 860,000 Irish passports issued last year. A further rise in applications is expected this week because of the focus on Saint Patrick’s Day, or the Feast of Saint Patrick activities.

Last month, the passport division of the Irish embassy in London said that they were ‘stretched and working under pressure’, and that staffing levels ‘are not sufficient’ to meet the rising number of applications ahead of Brexit.