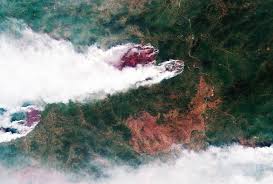 This month more than 21,000 square miles of forest caught fire in Siberia and Russia is heading for the worst year on record for wildfires.

In the Krasnoyarsk Krai, the Sakha Reublic and Zabaykalsky Krai wildfires had been spreading since July and by the end of the month, the Siberian forest fire covered 6.4 million acres.

The reason behind the forest fires were natural mostly due to high temperatures, strong gusts of wind, dry thunderstorms with lightning strikes.

Usually the average temperature ranges between 58 and 65 degrees Fahrenheit in the summer and lately the temperatures went up to 80s.

The largest forested area in the world is in Russia and the northern forests is known to cover about 45 percent of the country.

According to scientists Russia’s forests constitute 19 percent of all the world forests when considering the area.

The fires are mostly in inaccessible areas, the president and officials have reportedly said that they will only extinguish them if the cost of the destruction was more than the price to put them out which was not the case so far.

The fire-righting strategy was objected by critics partly as the smoke from the wildfires has travelled and lingered in the nearby cities of Novosibirisk and Krasnoyars.
However, the cities are hundreds of miles from the epicenter of the wildfires but are home to millions of people and are posing serious health threats.

Andrey Sirin, director of the Institute of Forest Science at the Russian Academy of Sciences stated that when the law was drafted in 2015, it never occurred to anyone that the wind would be able to bring smoke from the fires so far.Often the damage to people’s health is much worse than the damage to the economy.

Similar to the Amazonian fires, the Siberina fires might accelerate global warming and we could pay a huge price for letting the fires rage on their own.

Greenpeace Russia wildland fire expert and volunteer firefighter Anton Beneslavskiy said that these fires should have been put out at the very beginning, but were ignored due to weak policies. Now it has grown into a climate catastrophe that cannot be stopped by human means.

He went on saying that Russia should increase efforts in forest protection and provide sufficient funding for firefighting and fire prevention. The problem of wildfires should be addressed at the international level in the global climate agreements to keep global warming below 1.5°C.

Since the wildfires are up north, their ash and soot, which releases black carbon, pose a massive threat to the Arctic region’s ice sheets. They could accelerate melting, which will increase the amount of carbon released into the atmosphere. With less nearby forest to absorb it, this carbon will contribute to global warming at an unprecedented rate. Likewise, melting of the ice sheets might free previously-trapped permafrost methane, a greenhouse gas more potent than carbon dioxide and which is not absorbed in photosynthesis.

Brian Brettschendier, climatologist and post doctoral fellow at the International Arctic Research Center at the University of Alaska Fairbanks said that they have a handle on the trajectory of warming and the unexpected large release of methane from permafrost they will have to change the assumption on how fast warming is going to occurs and that change could be faster.