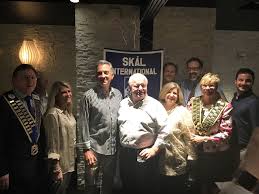 A delegation of tourism leaders representing Skal International-USA collaborated with other travel industry advocates for upholding key issues facing the growth and health of one of America’s economic engines at Destination Capitol Hill, organized by the U.S. Travel Association.

Skal International-USA president Burcin Turkkan, a member of the Skal Club of Atlanta said, “Moving forward to be more proactive on national issues after receiving feedback from our own membership is the right path. We are working hard on being advocates for our tourism issues and working with others in the industry on a national level increases our visibility and relevance. Skal in the U.S. wants to be with the big players in tourism.

Our participation at Destination Capitol Hill accomplished this, although it is just a start.”