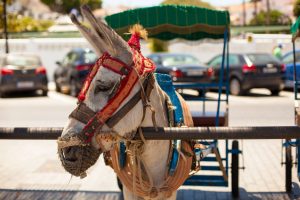 Holidaymakers who weigh more than 80 kg (12.5 stone) will not be allowed ride donkeys in a village in Spain.

In recent years to better protect the animal’s welfare, Mijas Pueblo on the Costa del Sol known for its burro-taxi, or donkey taxi has come under pressure.

By January 1, the ban is expected to be introduced by the local council after a consultation period.

It is expected that better veterinary care and hygiene for the donkeys will also be brought in.

Veronica Sanchez, director of Donkey refuge El Refugio del Burrito said that they were happy to have reached the point where the concept of animal welfare is incorporated with specific measures.

In order to come up new legislation the local authorities have worked with donkey owners, drivers and welfare associations and charities.

A Donkey Sanctuary spokesperson mentioned that although The Donkey Sanctuary does not actively promote the use of donkeys and mules in any form of tourism; they  do welcome the new regulations imposed by the Mijas authorities to help improve the welfare of working donkeys. They also welcome a commitment by the authorities to conduct inspections and enforce the regulations.

In recent years there have been calls to improve their working conditions, animals are used as taxis to take visitors up the 520-step cliffside path to the town of Fira on the Greek island

In September 2019, Peta filmed a footage which shows donkeys with open sores barbecue of ill-fitting saddles, makeshift girths and chains and muzzles around their noses instead of bridles.

The animals are beaten with sticks by their handlers and are prone to stumbling on the slippery path which endangers the nearby tourists who are on foot.

Peta Director Elisa Allen said that it was a disgrace that gentle donkeys and mules are still being whipped and marched into the ground as they are forced to work day in and day out with no relief from the hot sun.

Peta is calling on tourists to steer clear of these hideously cruel rides and are urging Greek authorities to step up and stop this abuse.

After a global appeal last year, the Greek Ministry of Rural Development and Food banned any person weighing over 100 kilograms from riding on donkeys.