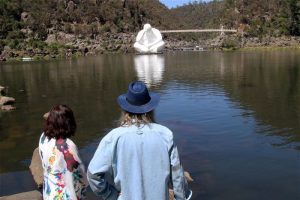 The week-long event, 2019 Mona Fona is all set to take center stage. Now Tasmania is expecting more tourists’ inflow with an economic boost for the north.

Thousands of people are expected to converge on the city for the week-long event, which is set to provide an economic boost for the north.

The artist Amanda Parer said the 12-metre-tall artwork, Man, is a new take on the famous bronze sculpture, The Thinker.

“I’ve made him more like contemporary man, a little bit worried that we’ve overindulged a bit too much on a few things in contemporary life,” she said. The work, which was commissioned for the festival, is illuminated at night.

It weighs more than 200 kilograms and takes 15 minutes to inflate.

“It’s even more special because it (Launceston) is my home town, it’s where I live and the Cataract Gorge First Basin where this is being shown is kind of like the Bondi of Launceston,” Parer said. Festival curator Brian Ritche said it was the perfect location for the piece.

“We know that the gorge is the heart and soul of Launceston and every person who comes to visit Launnie will want to come to the gorge, so we thought it would be a perfect frame.

“In fact, this is the most beautiful situation we’ve ever been able to place artwork into.”

A woman with brown hair and wearing a white t-shirt stands on a stage playing guitar and singing into a microphone.

Launceston was given a taste of MONA’s summer festival last January, and the event has now permanently shifted north.

“We’d like to bring people to Launceston, we’d also like to bring interesting music, art and ideas such as this to the people of Launnie,” Ritchie said.

Thousands of tickets have been sold for the event, which includes a range of exhibitions, performances and musical acts.

Organisers had a setback with headline act Underworld from the UK cancelling its Australian tour, but they have secured electro pop outfit PNAU as a replacement.

“The impact for us in the north is fantastic really for having MONA  this type of event … here in Launceston,” he said.

“Particularly in the last two weeks of January where we do have a bit of a dip in our visitation numbers. So this is the stimulus we’ve been really looking for.

“Normally at this time of year our hotels would be experiencing about 80 per cent occupancy in this last period of January, but we know with the event we should be expecting that to go up to 90 per cent.”

Mr Griffin said it also complimented other large events in the region.

“We’ve got a really vibrant event calendar from January through to Easter so this is a welcome addition, but when you think about Festivale and Agfest and Launceston Cup, we’re pretty spoiled for choice up here,” he said.