Thousands may have been exposed to coronavirus on Princess cruise ship 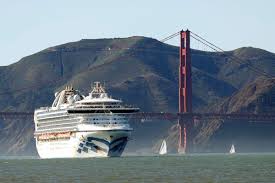 According to company officials, thousands of people on Princess Cruises’ Grand Princess may have been exposed to coronavirus after sailing with 62 passengers who had previously been on a voyage with a man who eventually died from the virus.

A 71-year-old man from California died from coronavirus after sailing on the Grand Princess on a cruise from San Francisco that visited Mexico from Feb. 11 through Feb. 21. Health officials in Placer County, where the man died, said he was “likely exposed” to the virus on board the Grand Princess.

The 62 passengers who may have come in contact with the man who died are now being confined to their staterooms on board, by order of the CDC. The ship was on its way to Mexico from a Hawaiian port, according to CruiseMapper.

But the cruise line has ordered the ship to re-route to San Francisco, where it is expected to arrive Thursday afternoon, according to a letter that Princess officials sent to passengers on board and which is available to read on the company web site.

Grand Princess is being held off the coast of California, Governor Gavin Newsom said at a press conference Wednesday. Newsom said that the ship was due to arrive Wednesday evening but would remain offshore until coronavirus testing on passengers can be completed. “We requested the arrival to be delayed,” he said.

The 62 passengers had moved about the ship freely until Wednesday, when they were asked to quarantine until cleared by medical officials, according to the cruise line. The ship can hold up to 2,600 guests and 1,150 crew members according to Princess Cruises’ website.

“For those guests who sailed with us on our previous voyage and may have been exposed, in an abundance of caution, the CDC requires you to remain in your stateroom until you have been contacted and cleared by our medical staff,” the passengers were informed in the letter. “A member of our medical team will be calling you between the hours of 8:00 a.m. and 11:00 a.m. this morning. You may order room service while you wait for the medical screening to be completed.”

There are 11 passengers and 10 crew members who have reported symptoms of coronavirus on board. That count may change, Newsom said. It remains unclear whether the 21 people that Newsom mentioned are part of the 62 people who have been required to stay in their staterooms.

“We extend our deepest condolences to the loved ones of this patient,” said Placer County Health Officer Dr. Aimee Sisson, in the release. “While we have expected more cases, this death is an unfortunate milestone in our efforts to fight this disease, and one that we never wanted to sec.”

Princess Cruises’ chief medical officer, Dr. Grant Tarling, sent a letter Wednesday to the current passengers of Grand Princess, some of whom were on the ship from Feb. 11 through Feb. 21.

In the letter, Tarling told passengers that the CDC is investigating “a small cluster” of cases in northern California in connection to the Grand Princess’ recent voyage.

“For those guests who sailed with us on our previous voyage and may have been exposed, in an abundance of caution, the CDC requires you to remain in your stateroom until you have been contacted and cleared by our medical staff,” the letter, posted to Princess Cruises’ website, reads.

According to CruiseMapper, the Grand Princess had been scheduled to return to San Francisco on March 7. The ship will skip its call to Ensenada on Thursday and instead sail directly to San Francisco.

A similar letter was sent to former passengers that had sailed on the Grand Princess, according to the cruise line.

“The CDC is continuing to actively collect information and is collaborating with us to determine what, if any, actions need to be taken during the current Hawaii cruise and upon the ship’s return to San Francisco,” Princess Cruises said in a release provided by spokeswoman Alivia Owyoung Ender.