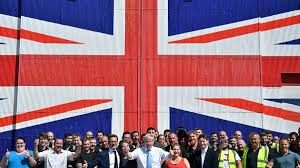 Joss Croft, chief executive of trade association UKinbound, showed his hesitation that people would buy a passport simply to explore the Channel.

He mentioned that passport ownership in many countries of Europe is much lower compared to the UK as many EU citizens travel on their ID cards all through the borderless Schengen area.

“We know that approximately only a third of Germans have passports, so to imagine that EU citizens will now pay for and acquire a passport solely to visit the UK is unrealistic,” Croft told PA.

“ID card usage is particularly prevalent among the many thousands of schoolchildren who visit from the EU, so proposals to remove the usage of these cards will need to take into account that many potential visitors will simply not come.”

Statistics published by tourist board VisitBritain demonstrate that in 2018, 71% of inbound visitors to the UK were from Europe.

They accounted for almost half (49%) of the £22.9 billion spent by visitors from foreign countries.

He continued: “By implementing a US-style visa system for our European visitors we risk putting off thousands of customers of the UK’s thriving tourist sector, threatening hundreds of family-run hotels and small businesses while reducing tax receipts.”

“By remaining in the EU, we will benefit from better security cooperation to keep us safe, while ensuring we don’t threaten our position as one of the world’s most visited countries.”
In the plans declared earlier this week, the Tories stated that they would stop the use of ID cards and wants all visitors to hold a biometric passport.

The proposals to make border security stringent would also involve the introduction of an American-style visa waiver scheme.

The party expects that the Electronic Travel Authorization would provide an improved ability to screen arrivals against watchlists and stops those who are considered to be a danger from entering the UK.

Home secretary Priti Patel said the Conservatives are “committed to doing everything we can to secure the border and protect the UK”.