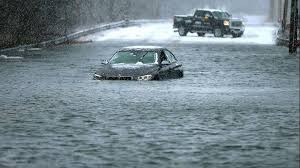 Atleast 11 deaths took place due to storm Grayson mostly in car crashes on icy roads. There were four deaths in North Carolina, two in Virginia and one in South Carolina, Massachusetts, New Jersey, New York, Pennsylvania as the storm hit more than  a dozen states.

The snowfall from storm has now departed from the Northeast and residents were digging out.

On Thursday there was complete shutdown of John F. Kennedy International Airport and LaGuardia Airport. More than 4,000 flights were cancelled across the nation.

Massachusetts Gov. Charlie Baker commented on the flooding as the “historic high tide” that prompted the deployment of National Guard high-water rescue vehicles to aid residents and stranded vehicles.

The National Weather Service confirmed of a tide record being set in Boston that surpassed the old record set during the Blizzard of 1978.

Heavy storm surge poured into the streets in towns like Scituate, Massachusetts, flooding the roads with partially frozen salt water.

The emergency management director in Suffolk County, Massachusetts reported 75 homes had flooding on their first floors and utilities were compromised, as per the National Weather Service (NWS).

A Massachusetts Water Resources Authority employee in Arlington was found in a snowbank, he went through a cardiac arrest while cleaning up after the storm.

The fire department tweeted that North of Plymouth, Massachusetts fire crews in the town of Duxbury responded to water rescues in flooded areas also a house fire was reported.

A teenager was killed in Perth Ambboy, NJ and 35 people at an apartment building suffered from carbon monoxide poisoning, according to news report.